Although the spotlight during the 2012 proxy season was clearly focused on the second year of shareholder advisory votes on executive compensation (“Say-on-Pay”), employee stock plan proposals (that is, proposals to either adopt a new employee stock plan or increase the share reserve for an existing plan) were also common at public technology and life sciences companies.

As in prior years, Compensia monitored the employee stock plan proposals – and related voting results – for the 150 largest technology and life sciences companies headquartered in the San Francisco Bay Area, which we call the Bay Area 150.

This Thoughtful Pay Alert summarizes the results for the past 12 months, based on these companies’ SEC filings.

Nearly one-third of the Bay Area 150 submitted shareholder proposals to either adopt a new employee stock plan or increase the share reserve for an existing plan during the past 12 months (based on the proxy statements filed for companies with fiscal year ends during the period from June 1, 2011 through May 31, 2012). This number is consistent with the number of proposals submitted for shareholder consideration in each of the prior two 12-month periods. 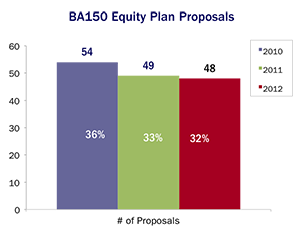 This pattern over the last three years reflects the typical life cycle for many employee stock plans. Mature public companies generally seek to replenish their employee stock plan share reserves, or adopt a new plan, approximately every two to three years. These results suggest that, in any given year, about one-third of the Bay Area 150 is going through the process – and attendant scrutiny – of seeking shareholder approval for an employee stock plan. This pattern results, in part, from the dilution policies of the major proxy advisory firms, such as Institutional Shareholder Services (“ISS”), and some institutional investors, which typically limit the number of shares that they will authorize at any given time for purposes of making equity awards.

Notable exceptions do exist, however, such as where companies seek approval of an employee stock plan share reserve increase on an annual basis for consistency or corporate governance purposes (as is the practice of Intel Corporation) and, on the flip side, where recently-public companies that are new to the Bay Area 150 have an “evergreen” provision in their employee stock plan that provides for annual share replenishments without shareholder approval for up to 10 years. In addition, some companies have favorable shareholder bases that permit more aggressive, longer-term share requests.

The size of the share reserve requests noted above are based on total shares as a percentage of each company’s outstanding shares (basic) of common stock. However, many of these employee stock plans contain a “fungible share” provisions that limits the amount of full-value equity awards (such as restricted stock unit awards, and performance shares) that may be granted from the share reserve. A fungible share provision serves to “count” full-value awards at a higher rate for reserve depletion purposes to effectively neutralize their impact on a plan’s share reserve relative to appreciation-based equity awards (such as stock options or stock appreciation rights). For example, if the employee stock plan provides that full-value awards count as two shares for share reserve purposes for every one share granted, then one restricted share granted will count the same as two option shares granted under the plan.

In 2012, 71% (34 of 48) of the Bay Area 150 companies that submitted proposals for new or amended employee stock plans had a fungible share provision in their plan. The total share requests for just these companies were slightly higher at the median than for those proposals at companies without fungible share provisions. Generally, the fungible share ratios ranged between 1.5:1 to 2.0:1 and, in most cases, were specifically derived for each company from the relative fair value of a full-value award compared to the value of an appreciation-based award.

Specific details are outlined below:

In 2012, each of the 48 Bay Area 150 companies with an employee stock plan proposal saw its proposal approved by its shareholders. The average level of support was 78.6% of the votes cast (which was largely consistent with the average level of support in 2011 – 75.2%). This level of support is consistent with the 2011 results where only one company failed to garner majority support for its employee stock plan proposal. However, 23% (11 of 48) of the companies received votes cast for the proposal representing 50% or less of their total outstanding shares which is likely reflective, in part, to the inability of these companies to count broker non-votes as votes for the proposal.

Shareholder support of employee stock plan proposals in 2012 was up somewhat from 2011, but the average size of these share requests declined slightly. Only 29% (14 of 48) of the companies conducting employee stock plan votes received less than 75% support based on the number of votes cast. Both the increased level of support and the decreased size of the share requests likely reflect that companies continue to comply with ISS’ equity plan dilution limits to ensure a successful proposal.

While some exceptions were evident, generally speaking proposals involving share amounts ranging between 2.5% to 4.5% of a company’s outstanding shares tended to generate between 75% to 90% support from shareholders. Once outside this range, however, the vote outcome proved to be less predictable.

When compared to the broader market, the experience of the Bay Area 150 companies was not unusual. In looking at public companies submitting a new employee stock plan or proposal for a share reserve increase during the first half of 2012, less than one-third received an unfavorable vote recommendation from one or more of the major proxy advisory firms and just a handful failed to be approved by shareholders.

Compensia has extensive experience in assisting companies in formulating employee stock plan proposals and developing effective strategies for obtaining shareholder approval of such proposals. If you would like assistance in analyzing your equity compensation strategy or negotiating the various pressure points in implementing an employee stock plan or a share reserve increase, or if you have any questions on the subjects addressed in this Thoughtful Pay Alert, please feel free to contact Jason Borrevik at 408.876.4035 or Mark A. Borges at 415.462.2995.