Changes to the Global Industry Classification Standard (“GICS”) structure announced late last year 2017 to better reflect modern communication activities are set to take effect at the end of September 2018. These changes, which represent the biggest reclassification of companies in the history of GISC, will affect numerous Internet and e-commerce companies, including Google, Netflix, and Facebook. For technology companies, the changes may prompt a reassessment of their compensation peer group, as well as their understanding of how their executive compensation program will be evaluated by Institutional Shareholder Services (“ISS”), the major proxy advisory firm. This Thoughtful Pay Alert describes the pending changes and provides our initial observations on their potential implications in the months ahead.

The Global Industry Classification Standard (“GICS”) structure is an industry taxonomy developed in 1999 by S&P Dow Jones Indices and MSCI, Inc. for use by the global financial community.  The GICS structure currently consists of 11 sectors, 24 industry groups, 68 industries, and 157 sub-industries into which Standard & Poor’s has categorized all major public companies. The GICS structure is used as a basis for Standard & Poor’s and MSCI’s financial market indexes in which each company is assigned to a sub-industry, and to a corresponding industry, industry group, and sector, according to the definition of its principal business activity.

In addition, the major proxy advisory firms, particularly Institutional Shareholder Services, Inc. (“ISS), use the GICS structure in their modeling analytics when formulating their voting recommendations on matters to be submitted for shareholder action at a company’s annual meeting of shareholders.

Changes to the GICS Structure

On November 17, 2017, S&P Dow Jones and MSCI announced revisions to the GICS structure “to reflect the evolution in the mode in which people communicate and access entertainment content and other information.” Citing this evolution as a result of the integration between telecommunications, media, and internet companies, the proposed revisions are as follows:

ISS uses the GICS structure classifications to construct compensation peer groups that are used in formulating its voting recommendations on compensation-related proposals submitted for shareholder action at companies’ annual meeting of shareholders, including the “Say-on-Pay” and employee stock plan proposals.

Although it is difficult to predict how the pending reclassifications will affect the analysis of a given company’s specific situation, we envision that changes could occur in these areas of ISS focus:

Initial Observations
While some of the changes that will result from the GISC structure reclassification will be nominal (for example, grouping internet software and other software companies together), other changes may have significant ramifications for how companies will be evaluated for comparative purposes (for example, moving internet retail companies from the “Information Technology” sector to the “Consumer Discretionary” sector). The most prominent technology companies affected by the changes, along with their new proposed classifications, are listed on Exhibit A to this article.

About the Authors
The authors of this Thoughtful Pay Alert are Mark Borges and Jason Borrevik, principals at Compensia. If you have any questions about this Thoughtful Pay Alert or the implications of the changes to the GICS structures generally, Mark can be reached at 415.462.2995 or mborges@compensia.com and Jason can be reached at 408.876.4035 or jborrevik@compensia.com.

Need Assistance?
Compensia has significant experience in helping companies understand and address ISS’ corporate governance and executive compensation policies. If you have any questions on the topics covered in this Thoughtful Pay Alert or would like assistance is assessing how the policies are likely to affect your executive compensation program, please feel free to contact Jason Borrevik or Mark A. Borges. 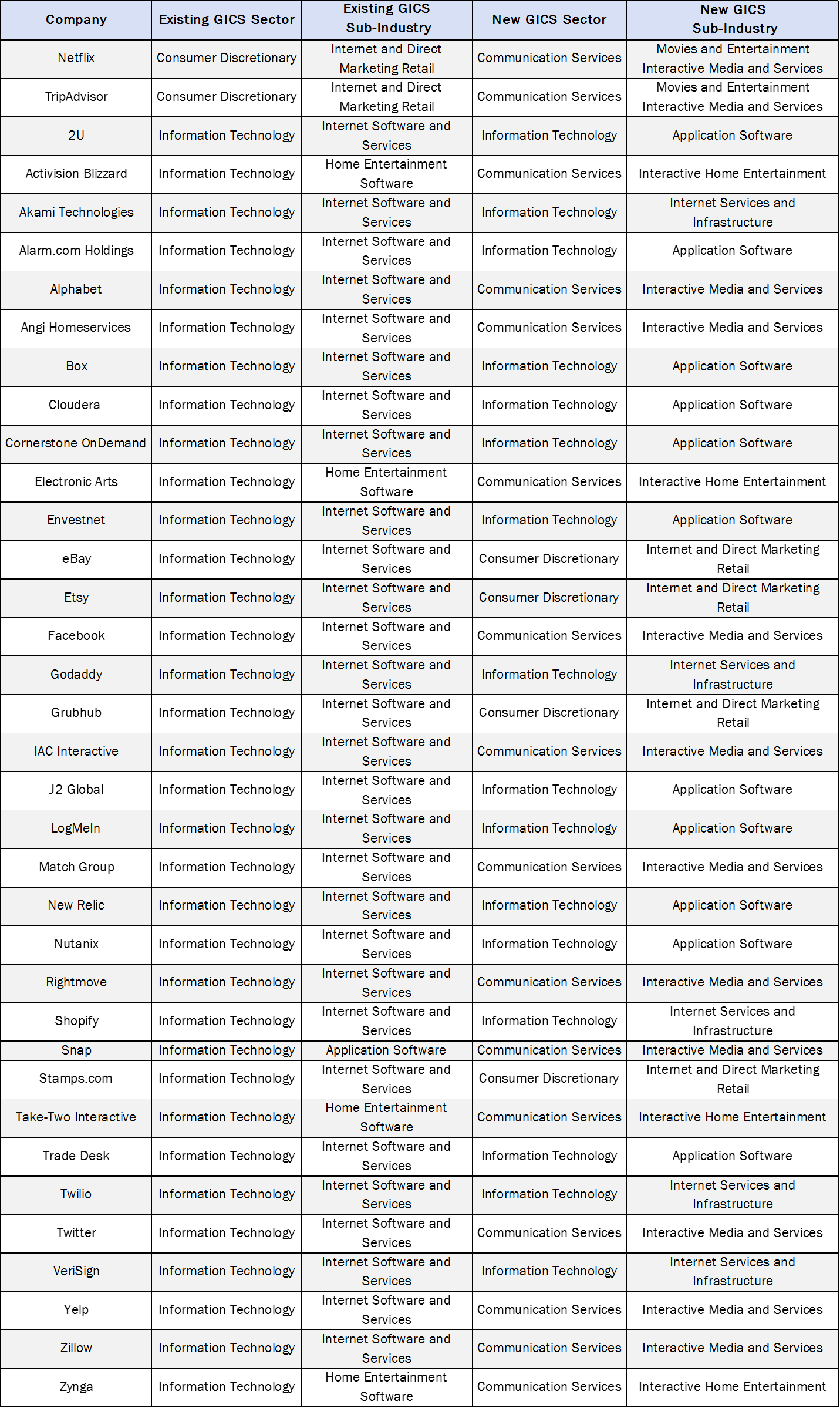