Each year, ISS updates its burn rate tables and allowable limits for Russell 3000 and non-Russell 3000 companies for the upcoming proxy season. ISS measures “burn rate” using the total number of equity awards (stock and options) granted in a given year and expresses the computation as a percentage of the number of common shares outstanding. These tables set the acceptable burn rate levels (based on one standard deviation above the industry mean) using global industry classification standard (“GICS”) codes.

ISS’ updated 2011 burn rate tables, which apply to annual meetings of shareholders that are held on or after February 1, 2011, are set forth in the chart below.

Currently, ISS will recommend a vote “against” an equity plan proposal if the company’s average three-year burn rate exceeds the greater of:

As part of its annual proxy analysis, ISS will also penalize a company that fails the burn rate test (by deducting points from its compensation score) when conducting its Governance Risk Indicators (“GRId”) review of the company’s governance-related practices. 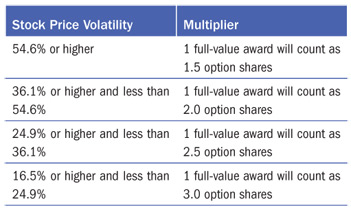 Where a company does not meet ISS’ applicable burn rate cap, it can avoid an “against” vote recommendation if it commits to a prospective gross three-year average burn rate equal to the higher of 2% of the company’s common shares outstanding or the mean plus one standard deviation of its GICS peer group. The company’s burn rate may exceed the GICS peer group average in the first two years, as long as the prospective three-year average burn rate remains below the commitment level.

This commitment must be publicly disclosed, either in a current report on Form 8-K or in the company’s definitive proxy statement.

Observations. While ISS’ burn rate methodology remains the same as in 2010, all of the burn rate limits for Russell 3000 companies increased significantly (with an average increase of 55%) due primarily to higher equity usage in fiscal 2009 and the increased use of full-value awards (which, as noted above, are counted higher in the burn rate methodology). For technology and life sciences companies, the limits changed as follows:

For non-Russell 3000 companies, burn rate limits also increased significantly (with an average increase of 49%). For technology and life sciences companies, the limits changed as follows:

As part of the 2011 changes and to limit extreme fluctuations from year to year, ISS now provides that annual limits cannot increase or decrease by more than 2% each year.

Companies should consider these updated limits as one factor in their annual equity strategy review. Companies that developed equity budgets for 2011 based on then-current 2010 limits may have more flexibility with their equity programs as a result of these increased limits (depending on program goals, equity plan funding, competitive needs, etc.).

ISS answers four questions about the new shareholder advisory vote on the frequency of “Say on Pay” votes, which all companies must include in their proxy materials for their 2011 annual meeting of shareholders. As indicated in its U.S. Corporate Governance Policy Updates, which were published in November, ISS is recommending that “Say on Pay” votes be held annually.

The most significant FAQ concerns ISS’ response in the event that a company’s board of directors decides not to adopt the “Say on Pay” vote frequency supported by a plurality of the votes cast on the frequency vote resolution. ISS indicates that it has not yet established a policy with respect to this question. Instead, the policy will be decided after review of the first year of voting results and after consultation with ISS’ clients. ISS’ policy position will be included in its policy updates for 2012.

While ultimately the ISS policy will depend on the actual outcome of the frequency votes conducted during the 2011 proxy season, it appears likely that, if a significant number of boards of directors select a frequency for future “Say on Pay” votes that differs from the frequency supported by shareholders, it will consider that a basis for recommending a “withhold” or “against” vote for compensation committee members (and, potentially, all directors).

ISS answers nine questions concerning compensation practices that it has identified as “problematic,” along with its new position that it will no longer consider prospective commitments to change such pay practices in rendering or reversing a vote recommendation.

Among other matters, ISS provides a complete list of the pay practices that it considers “problematic” (see Question No. 3) and makes clear that it will continue to apply a “holistic” approach to analyzing executive compensation policies and arrangements. In other words, while most practices will not, on a stand-alone basis, result in a “withhold” or “against” vote recommendation, practices that are considered contrary to a performance-based pay philosophy, evaluated in the totality of a company’s particular situation, may result in a negative vote recommendation.

As expected, ISS is taking the position that, where a company includes a prescribed Golden Parachute Compensation Table as part of its executive compensation disclosure, the information provided in the table will carry more weight in its overall “Say on Pay” vote recommendation. In other words, if a company’s change-in-control arrangements contain a policy or feature that runs afoul of an ISS policy (such as, for example, “single trigger” equity acceleration), this may disproportionately influence its voting recommendation, even where the rest of the company’s executive compensation practices conform to ISS’ positions.