This Thoughtful Pay Alert summarizes the key ISS executive compensation and equity compensation plan-related FAQs updates for 2020. A summary of ISS’ benchmark policy changes for 2020 is available at the following link. These updates will be effective for annual meetings of shareholders taking place on or after February 1, 2020.

Introduction of EVA Metrics – In addition to adjusting the thresholds that trigger concern under the Relative Degree of Alignment (“RDA”) test and the Pay-TSR Alignment (“PTA”) test in the quantitative screening portion of its pay-for-performance methodology for evaluating executive compensation programs as previously announced, for annual meetings of shareholders held on or after February 1, 2020 the performance metrics used in the secondary Financial Performance Assessment (“FPA”) screen will be Economic Value Added (“EVA”) metrics instead of the GAAP/accounting metrics used in previous years. The GAAP metrics will continue to be displayed in research reports for informational purposes but will no longer be part of the quantitative screen.

As ISS explains in its updated White Paper on U.S. Pay-for- Performance Mechanics, EVA represents a company’s economic profit after meeting all of its obligations, including the demands of its capital providers. Formulaically, EVA is net operating profit after taxes, less a capital charge which is computed by multiplying a company’s capital base by its cost of capital. ISS goes on to note that because EVA uses a rules-based method for converting accounting data into economic performance information through a consistent framework, this information is comparable across companies, industries, and countries.

The FPA compares a company’s financial and operational performance over the long-term (typically, three years) versus an ISS-developed peer group. As reformulated, the FPA requires a minimum two-year period of CEO pay and EVA data. ISS indicates that if insufficient data exists for either CEO pay or the EVA measures, the FPA screen will be excluded. Generally, the FPA screen will use four equally weighted EVA-based metrics (which are defined as noted):

ISS notes that the methodology for EVA metrics excludes financial periods in which a company’s revenue or capital was less than $5 million. In these situations where a company may lack sufficient data for an EVA metric calculation, the FPA screen may be excluded.

ISS is letting covered companies download their EVA profile for free. This profile provides a high-level breakdown of a company’s EVA calculation and the four metrics used in the FPA using data from the most recently available quarterly data download applicable to the company’s next annual meeting of shareholders. For additional information about the EVA methodology, including the adjustments used to calculate EVA, and to download your EVA profile, ISS invites companies to visit its EVA Resource Center.

New Three-Year Multiple of Median Display – One of the current analyses used in ISS’ quantitative pay-for-performance screen is the Multiple of Median (“MOM”) test. This relative measure of alignment considers the prior year’s CEO pay as a multiple of the median CEO pay of its ISS-developed peer group for the most recently available annual period and is used to identify instances where the magnitude of CEO pay is significantly higher than the amounts typical for the comparator group, independent of company performance.

Beginning with the 2020 proxy season, ISS research reports will include a three-year MOM view of CEO pay as a measure of long- term pay magnitude relative to the ISS-developed peer group. This three-year MOM will show the CEO’s average pay over the past three years compared to his or her peers. In addition, the display will show the CEO’s three-year cumulative pay total. The three-year MOM will not be part of the quantitative screen methodology, but ISS indicates that the results will inform its qualitative evaluation of an executive compensation program.

ISS’ new policy on “excessive” director compensation goes into effect for the 2020 proxy season and, accordingly, the FAQ about how ISS intends to apply the policy has been updated. Under this policy, ISS will recommend a vote against the members of the Board committee responsible for setting and/or approving non-employee director (“NED”) compensation if it determines that there has been a recurring pattern (that is, two or more consecutive years) where the magnitude of NED pay is considered excessive (generally representing individual pay figures above the top 2% of all comparable directors) without a compelling rationale for such compensation. The potential for an adverse voting recommendation begins with annual meetings of shareholders occurring on or after February 1, 2020 (that is, for companies where ISS has identified excessive NED pay without disclosure of a compelling rationale for such pay in both 2019 and 2020).

Recognizing that Board-level leadership positions (which, for this purpose, are limited to non-executive chairs and lead independent directors) often receive a pay premium as compared to other directors, the ISS methodology will identify outliers as compared to others within the same category of board leadership (still considering sector and index). The methodology will also consider limited instances of narrow distributions of NED pay within any particular sector and index grouping. In groups where there is not a pronounced difference in the magnitude of pay between the highest paid directors and the median director, this may be considered to be a mitigating factor.

Once a director has been identified as a pay outlier, a qualitative evaluation of the company’s disclosure will determine if concerns around high pay levels are adequately mitigated. In evaluating a company’s disclosed rationale, the following circumstances, if reasonable and adequately explained, will typically mitigate concern about high NED pay:

Payments in connection with separate consulting or service agreements will be assessed on a case-by-case basis with particular focus on the company’s rationale for the arrangement. Consequently, companies should disclose the services provided under the agreement that go beyond typical director responsibilities. Further, the agreement should have a fixed term, and the additional benefits conveyed to shareholders by the agreement should be clearly explained.

ISS goes on to state that the following circumstances will generally not mitigate concern about high NED pay:

Expanding on its practice of carefully scrutinizing severance arrangements for problematic pay practices, ISS has added an FAQ on the quality of the disclosure that a company provides when it has made severance payments to a departing executive. Noting that severance payments are not appropriate for executives who voluntarily resign or retire, ISS states that investors expect clear and direct disclosure about the nature of and reasons for an executive’s termination of employment, as well as how the Board of Directors determined to pay severance to the executive. Accordingly, ISS expects a company’s disclosure about a termination to be sufficiently specific to enable shareholders to assess the appropriateness of any related severance payments and to determine whether there have been any discretionary enhancements. Citing disclosure indicating that an executive “stepped down” as ambiguous at best, ISS goes on to indicate that a company should identify in each instance the type of termination (for example, a termination of employment without cause or resignation for good reason) and the provision by which severance payments were made under the applicable agreement.

The EPSC passing score thresholds – 55 points (for the S&P 500 model) or 53 points (for other models) – to receive a favorable vote recommendation (absent overriding/egregious factors) remain unchanged for the 2020 proxy season. As expected, ISS has indicated that certain factor scores have been adjusted, per ISS’ proprietary scoring model. However, the details of these reallocations are not disclosed in the FAQs.

In addition, a new negative overriding factor relating to “evergreen” provisions has been introduced. Under this factor, ISS may recommend a vote against an equity compensation plan proposal or a proposed amendment to an existing plan if the plan contains a feature providing for automatic share replenishment without the need for shareholder reapproval for each increase in authorized shares, regardless of the EPSC score. Sunset provisions applicable to such features will not be considered a mitigating factor. In our experience, most companies with “evergreen” provisions in their equity compensation plans do not seek shareholder approval of plan amendments. As a result, this policy change may have relatively limited practical impact.

Generally, ISS will base its voting recommendation on an equity compensation plan proposal involving a plan amendment on the plan’s EPSC score if any of the following scenarios apply:

Beginning with the 2020 proxy season, ISS has expanded this list to include amendments that involve the elimination or increase of a full value award aggregate (plan) limit or the elimination of a fungible ratio.

If none of these amendment scenarios apply, a plan amendment proposal will receive a recommendation based on a qualitative analysis of the overall impact of the amendments; that is, whether overall they are deemed to be in the best interests of shareholders. In these cases, the EPSC score typically will not determine ISS’ recommendation, although the EPSC summary and scoring will be displayed for informational purposes.

Each year, ISS updates its burn rate tables and stated benchmarks for S&P 500, Russell 3000 (excluding the S&P 500), and non-Russell 3000 companies for the upcoming proxy season. Generally, ISS measures “burn rate” using the total number of equity awards (full value stock awards and stock options) granted in a given year (or earned for performance-based awards if sufficient disclosure) and expresses the computation as a percentage of the number of common shares outstanding. These tables set ISS’ burn rate benchmarks (based on one standard deviation above the industry mean) using the GICS codes assigned to each company.

ISS’ updated 2020 burn rate tables, which apply to annual meetings of shareholders held on or after February 1, 2020, are set forth in the Exhibit to this article.

Companies should consider these updated benchmarks as one factor in their annual equity strategy review. Companies that developed equity budgets for 2020 with consideration of the then-current 2019 limits may generally have more flexibility with their equity compensation plans than originally anticipated (depending on program goals, equity plan funding, competitive needs, etc.).

Compensia has significant experience in helping companies understand and address ISS’ corporate governance and executive compensation policies. If you have any questions on the topics covered in this Thoughtful Pay Alert or would like assistance is assessing how the policies are likely to affect your executive compensation program, please feel free to contact Jason Borrevik at 408.876.4035 or Mark A. Borges at 415.462.2995. 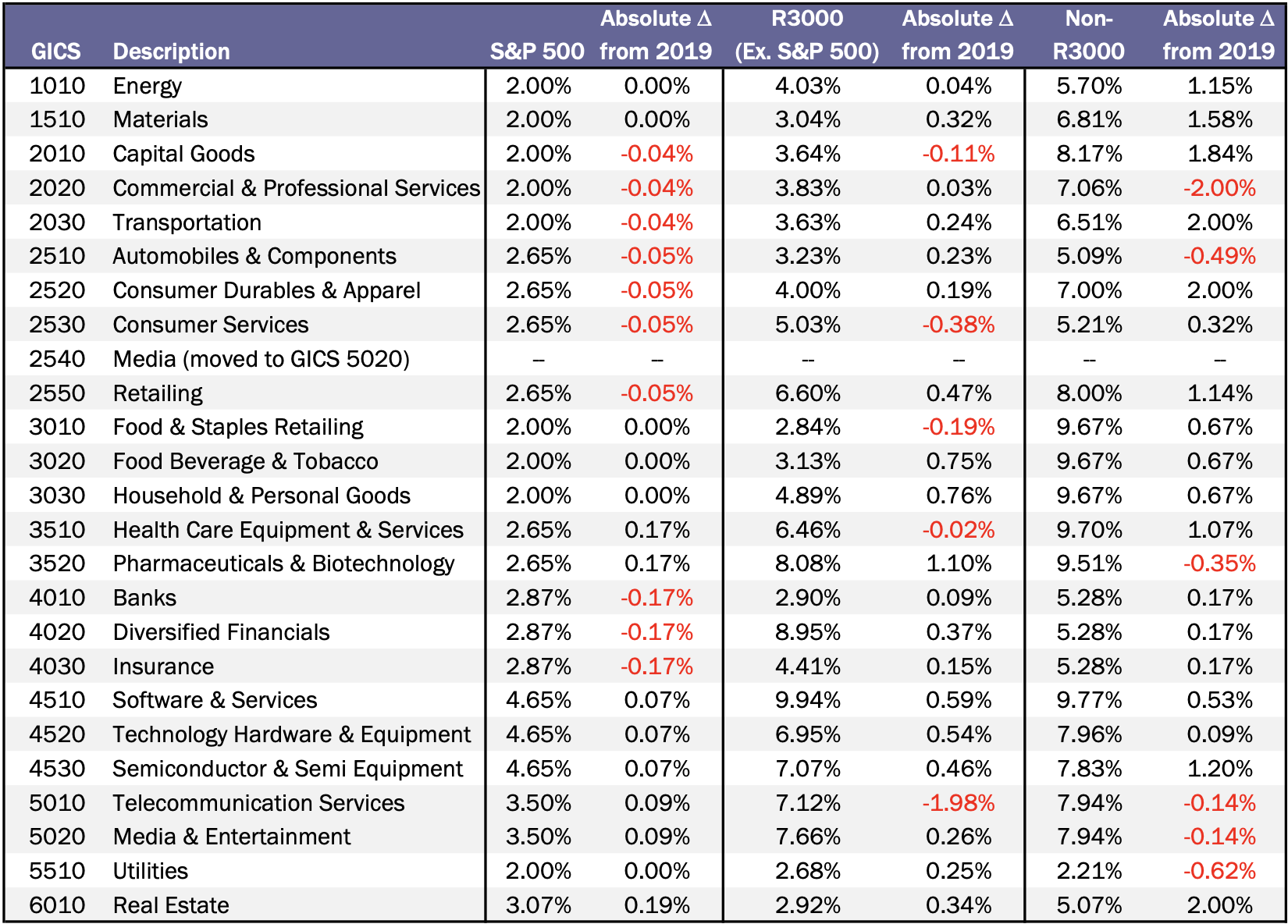