This Thoughtful Pay Alert summarizes the key ISS executive compensation-related policy updates for 2019. A summary of ISS’ benchmark policy changes for 2019 are available at the following link. These updates will be effective for annual meetings of shareholders taking place on or after February 1, 2019.

Executive Compensation Policy FAQs
While ISS made no major substantive changes to its U.S. benchmark voting policies for the 2019 proxy season, it updated its executive compensation policy FAQs in the following respects:

ISS has made no changes for 2019 to the quantitative screening portion of its pay-for-performance methodology for evaluating executive compensation programs for purposes of issuing a voting recommendation on a Say-on-Pay proposal. The Financial Performance Assessment (“FPA”) screen, which serves as a “secondary” screening “modifier” to the pay-for-performance methodology and compares a company’s financial and operational performance against its ISS-constructed peer group over a three-year period, will continue to use GAAP/accounting performance measures.

However, ISS has indicated that it will continue to explore the potential for future use of Economic Value Added (“EVA”) measures to add additional insight into a company’s financial performance. To that end, EVA measures will be displayed in ISS research reports on a phased-in basis over the 2019 proxy season, although not as part of the quantitative pay-for-performance screen.

Interestingly, in spite of its heavy reliance on total shareholder return (“TSR”) in the quantitative screen, ISS states in the FAQs that it does not endorse or prefer the use of TSR or any specific metric in incentive compensation programs for executives. Instead, ISS indicates that it believes that a company’s Board of Directors (or Board Compensation Committee) is generally best qualified to determine the incentive plan metrics that will encourage executive decision-making that promotes long-term shareholder value creation.

In response to the increase in large, multi-year equity awards that have been granted by certain companies, ISS indicates that it is unlikely to support such awards that are intended to cover more than four years (that is, the grant year plus three future years). In its view, very large awards that are intended to cover multiple future years limit the ability of the Board of Directors to meaningfully adjust future pay opportunities in the event of unforeseen events or changes in either performance or strategic focus.

ISS goes on to state that, in its qualitative review of these “front-loaded” equity awards, commitments from the company not to grant additional awards over the covered period should be firm. Further, since such awards typically provide for exceptionally large pay opportunities, usual “pay-for-performance” considerations will be more closely scrutinized, including the thoroughness of the attendant disclosure, an emphasis on transparent and rigorous performance criteria, and stringent vesting provisions that limit the risk of a “windfall.”

As previously reported, during the 2018 proxy season, ISS introduced a new policy providing that it would recommend a vote against the members of the Board committee responsible for setting and/or approving non-employee director (“NED”) compensation if it was determined that there was a recurring pattern (that is, two or more years) of awarding “excessive” non-employee director compensation without a compelling rationale for such compensation. While not impacting vote recommendations in 2018, unfavorable voting recommendations were to be issued beginning in 2019 where a pattern of excessive NED compensation is identified in consecutive years.

In response to investor feedback, ISS has updated its methodology for identifying “excessive” NED compensation. As before, following a quantitative identification of a director pay outlier, a qualitative evaluation of the company’s disclosure will determine if concerns are adequately mitigated.

The methodology for identifying NED pay outliers has been revised to identify pay outliers representing individual director pay figures above the top 2-3% of all comparable directors. ISS will compare individual director pay totals within the same index and sector. Directors will be compared to other directors within the same two-digit GICS group and within the same index grouping. Index groupings for purposes of the policy are as follows: S&P 500, combined S&P 400 and S&P 600, the remainder of the Russell 3000 Index, and the Russell 3000 – Extended.

The revised methodology also recognizes that Board-level leadership positions (which, for this purpose, are limited to non-executive chairs and lead independent directors) often are addressed with a pay premium as compared to other directors. For NEDs who serve in these board leadership positions, the policy will identify outliers as compared to others within the same category of board leadership (still considering sector and index).

The revised methodology also considers limited instances of narrow distributions of NED pay within any particular sector-index grouping. In groups where there is not a pronounced difference in pay magnitude between the top 2-3% of directors and the median director, this may be considered as a mitigating factor.

In consideration of this methodology change, adverse voting recommendations will not be issued under this policy until annual meetings of shareholders occurring on or after Feb. 1, 2020 (that is, for companies where ISS has identified excessive NED pay without a compelling rationale in both 2019 and 2020). In evaluating a company’s disclosed rationale, the following circumstances, if within reason and adequately explained, would typically mitigate concern about high NED pay:

Payments in connection with separate consulting agreements will be assessed on a case-by-case basis with particular focus on the company’s rationale. Payments to reward general performance or service will generally not be viewed as constituting a compelling rationale.

ISS has updated its list of problematic pay practices that carry significant weight and which will, in and of themselves, likely result in an adverse vote recommendation to include “problematic” definitions of what constitutes a “good reason” termination of employment. In ISS’ view, change-in-control severance payments in connection with a “good reason” termination should be limited to circumstances that are reasonably viewed as an adverse constructive termination (that is, employer actions that result in a material negative change to an executive’s title or role, function or compensation). Further, such provisions should be tailored to preclude potential risk of a “windfall” payment. To that end, definitions that are triggered by circumstances reflecting potential performance failures, such as a company bankruptcy or delisting, will be considered “problematic.”

In 2018, the Securities and Exchange Commission revised the threshold standards for “smaller reporting company” (“SRC”) status, making it easier for some public companies currently subject to the SEC’s full reporting requirements to qualify to use the scaled reporting system available to SRCs. ISS notes that while SRCs are eligible for reduced executive compensation disclosure, they are still required to hold Say on Pay votes. ISS goes on to state that the completeness of disclosure is an important “pay-for-performance” consideration. Thus, companies with scaled compensation disclosure requirements should continue to provide sufficient disclosure to enable shareholders to make an informed “Say on Pay” vote. ISS indicates that it is unlikely to support a “Say on Pay” proposal if a company’s executive compensation disclosure is such that shareholders cannot meaningfully assess the Board of Directors’ compensation philosophy and practices.

Equity Plan Scorecard FAQs
ISS has made several revisions to its “Equity Plan Scorecard,” the methodology that it employs to evaluate management proposals to adopt a new equity compensation plan or amend an existing plan. As reflected in the FAQs, these changes are as follows:

While the EPSC passing score thresholds – 55 points (for the S&P 500 model) or 53 points (for other models) – to receive a favorable vote recommendation (absent overriding/egregious factors) remain unchanged, ISS has made several other updates to its EPSC methodology:

This factor examines share capital dilution (as opposed to voting power dilution) which is commonly referred to as “total equity overhang” and is calculated as: (A + B + C) ÷ CSO, where: A = the number of new shares requested; B = the number of shares that remain available for issuance; C = the number of unexercised/unvested outstanding awards; and CSO = the common shares outstanding.

To comply with the “grandfather rule” relating to the elimination of the “performance-based compensation” exception to the Section 162(m) tax deduction limitation, ISS expects that equity plan proposals will continue to appear on the annual meeting agenda for continued Section 162(m) qualification. Further, its evaluation of Section 162(m)-related proposals will remain consistent with prior years.

Proposals that only seek approval to ensure tax deductibility of awards pursuant to Section 162(m) under the grandfather rule – and that do not seek additional shares for grants or approval of any plan amendments – will generally receive a favorable recommendation regardless of EPSC factors (“positive override”), provided that the Board Compensation Committee is 100% independent according to ISS standards.

Plan amendments that involve removal of general references to Section 162(m) qualification will be viewed as administrative and, therefore, neutral. This includes references to approved metrics for use in performance plan-based awards.

Of greater significance is ISS’ view of the various requirements for qualifying for the “performance-based compensation” exception that are recognized by shareholders as good, or “best,” practice. If a plan contains provisions representing good governance practices, even if no longer required for purposes of Section 162(m), their removal may be viewed as a negative change in a plan amendment evaluation. For example, the removal of individual award limits would be viewed as a negative change. Consequently, ISS encourages companies to maintain plan provisions that represent good governance practices, even if they are no longer required under Section 162(m).

Burn Rate Tables
Each year, ISS updates its burn rate tables and stated benchmarks for S&P 500, Russell 3000 (excluding the S&P 500), and non-Russell 3000 companies for the upcoming proxy season. Generally, ISS measures “burn rate” using the total number of equity awards (full value stock awards and stock options) granted in a given year (or earned for performance-based awards if sufficient disclosure) and expresses the computation as a percentage of the number of common shares outstanding. These tables set ISS’ burn rate benchmarks (based on one standard deviation above the industry mean) using Standard & Poor’s global industry classification standard (“GICS”) codes as assigned to each company.

ISS’ updated 2019 burn rate tables, which apply to annual meetings of shareholders held on or after February 1, 2019, are set forth in the Exhibit to this article.

Observations. While ISS’ burn rate methodology remains the same as in 2018, the 2019 burn rate benchmarks for key technology and life science industry sectors are generally slightly higher, with two notable exceptions – the benchmark for the S&P 500 Information Technology sector is down by 0.26% to 4.84% and the benchmark for the Russell 3000 Software & Services sector went down by nearly one point (0.87%) to 9.35%.

Companies should consider these updated benchmarks as one factor in their annual equity strategy review. Companies that developed equity budgets for 2019 with consideration of the then-current 2018 limits may have more or less flexibility with their equity compensation plans than originally anticipated (depending on program goals, equity plan funding, competitive needs, etc.).

Further Information
To obtain a copy of each of the materials discussed in this article, please click on the applicable link:

Need Assistance?
Compensia has significant experience in helping companies understand and address ISS’ corporate governance and executive compensation policies. If you have any questions on the topics covered in this Thoughtful Pay Alert or would like assistance is assessing how the policies are likely to affect your executive compensation program, please feel free to contact Jason Borrevik at 408.876.4035 or Mark A. Borges at 415.462.2995. 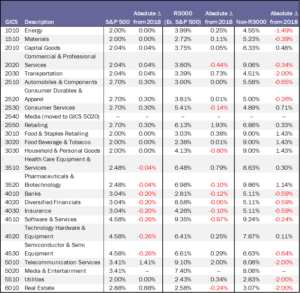