Just prior to the holidays, Institutional Shareholder Services (“ISS”) has published several supplemental documents that elaborate on its U.S. executive compensation benchmark policy guidelines for 2022. These documents include FAQs for both its U.S. compensation and equity plan policies (including updated equity burn rate tables for the 2022 proxy season).

This Thoughtful Pay Alert summarizes the key new ISS FAQs for its executive compensation and equity plan-related policies. A summary of ISS’ benchmark policy changes for 2022 is available at the following link. These updates will be effective for annual meetings of shareholders taking place on or after February 1, 2022.

In recent years, there has been an increase in front-loaded, multi-year equity awards to senior executives, which often provide for large payouts where, over a multi-year period, there has been a significant increase in the company’s stock price or overall market capitalization or achievement of long-term financial performance goals. In some instances, companies have submitted these awards for shareholder approval as part of the authorization process. ISS has indicated that it will generally evaluate proposals seeking approval of individual equity awards on a case-by-case basis, taking into account a variety of pay-for-performance considerations and other factors, which may include (without limitation):

As we know, ISS evaluates the alignment between a company’s executive compensation program and its financial performance using a methodology that includes an initial quantitative assessment (consisting of four “screens” or tests) of the relationship between the compensation of a company’s CEO and its stock price/financial performance. ISS has made no changes to the three primary screens (the Relative Degree of Alignment (“RDA”) test, the Multiple of Median (“MOM”) test, or the Pay-TSR Alignment (“PTA”) test for 2022. For annual meetings of shareholders on or after Feb. 1, 2022, ISS made slight updates to the “Eligible for FPA Adjustment” thresholds under the Financial Performance assessment test. Those adjustments are discussed in detail in ISS’ Pay-for-Performance Mechanics white paper.

Given the exceptional circumstances of the COVID-19 pandemic and its impact on the operations of many companies, ISS notes that it will continue to consider a company’s individual circumstances as part of its qualitative evaluation of its executive compensation program. In this regard, ISS has changed its approach somewhat when it evaluates a company’s pay decisions, and changes to existing incentive compensation plans, that were impacted by the pandemic. This updated guidance can be found in ISS’ U.S. Compensation Policies and the COVID-19 Pandemic FAQ (Updated for 2022).

Among the various shareholder advisory votes on executive compensation added by the Dodd-Frank Act is the so-called “Say-on-Golden Parachutes” vote under Section 14A(b) the Securities Exchange Act of 1934. Essentially, that vote is required when shareholders are being asked to approve certain corporate transactions, such as an acquisition, merger, consolidation, or proposed sale or other disposition of all or substantially all the assets of the company. ISS has added a question to its discussion of “Say-on-Golden-Parachute” votes to highlight the practices that are most likely to lead to an “against” vote recommendation on these proposals. The following practices are considered to carry significant weight and will likely result in an adverse “Say-on-Golden-Parachute” vote recommendation, in and of themselves:

Although ISS made no changes to the factors, weightings or passing scores for any of the Equity Plan Scorecard (“EPSC”) models for 2022, it did update its burn rate guidance, consistent with its recent announcement of a significant change to its burn rate methodology beginning in 2023.

In a separate FAQ, ISS sets out the VABR formula as follows:

Beginning with annual meetings on or after Feb. 1, 2022, the EPSC evaluation will display a company’s VABR that will be shown alongside the current multiplier-based adjusted burn rate. For 2022 meetings, the VABR will be displayed for informational purposes only and will not affect the EPSC evaluation or score (although, as noted above, it is expected to replace the existing EPSC burn rate factor beginning in 2023). ISS promises that it will be providing more information on this change after the 2022 proxy season.

In order to receive EPSC points for a clawback policy, ISS indicates that the policy should authorize recovery upon a financial restatement and cover all or most equity-based compensation for all named executive officers. ISS goes on to confirm that the company will not receive credit for a clawback policy that contains only the limited requirements specified under the Sarbanes-Oxley Act, nor if the company discloses that it will establish a clawback policy only after the finalization of applicable rules under the Dodd-Frank Act. With its recent reopening of the comment process on Section 954 of the Dodd-Frank Act, it’s likely that we will see the SEC propose and/or adopt a final rule on clawback policies later this year, which will trigger further ISS action in this area.

Each year, ISS updates its burn rate tables and stated benchmarks for S&P 500, Russell 3000 (excluding the S&P 500), and non-Russell 3000 companies for the upcoming proxy season. Generally, ISS measures “burn rate” using the total number of equity awards (full value stock awards and stock options) granted in a given year (or earned for performance-based awards if sufficient disclosure) and expresses the computation as a percentage of the number of common shares outstanding. These tables set ISS’ burn rate benchmarks (based on one standard deviation above the industry mean) using Standard & Poor’s global industry classification standard (“GICS”) codes as assigned to each company.

ISS’ updated 2022 burn rate tables (which will be the last time this methodology is used by ISS) are set forth in the Exhibit to this article. 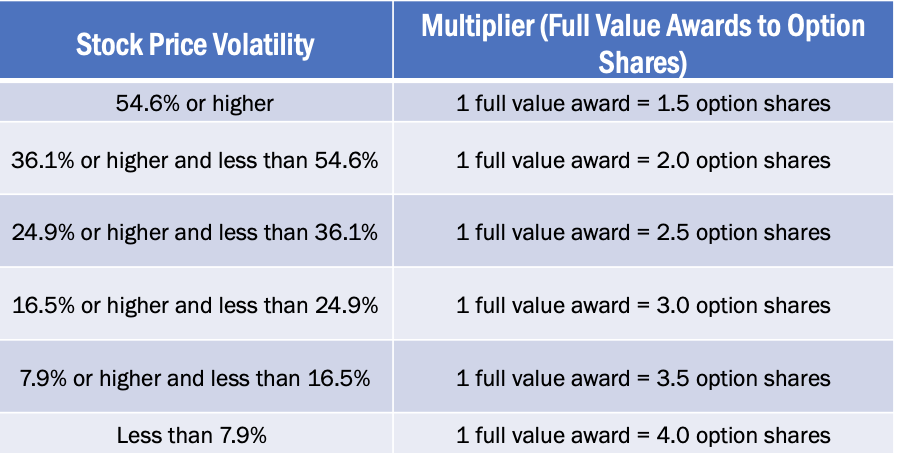 While ISS’ burn rate methodology remains the same as in 2021, overall the 2022 burn rate benchmarks for key technology and life science industry sectors are generally down from the prior year. This is due in part to ISS’ benchmark methodology which covers the practices at companies in 2018 to 2020 and does not reflect the uptick in equity spend that we have observed in 2021 at many clients. 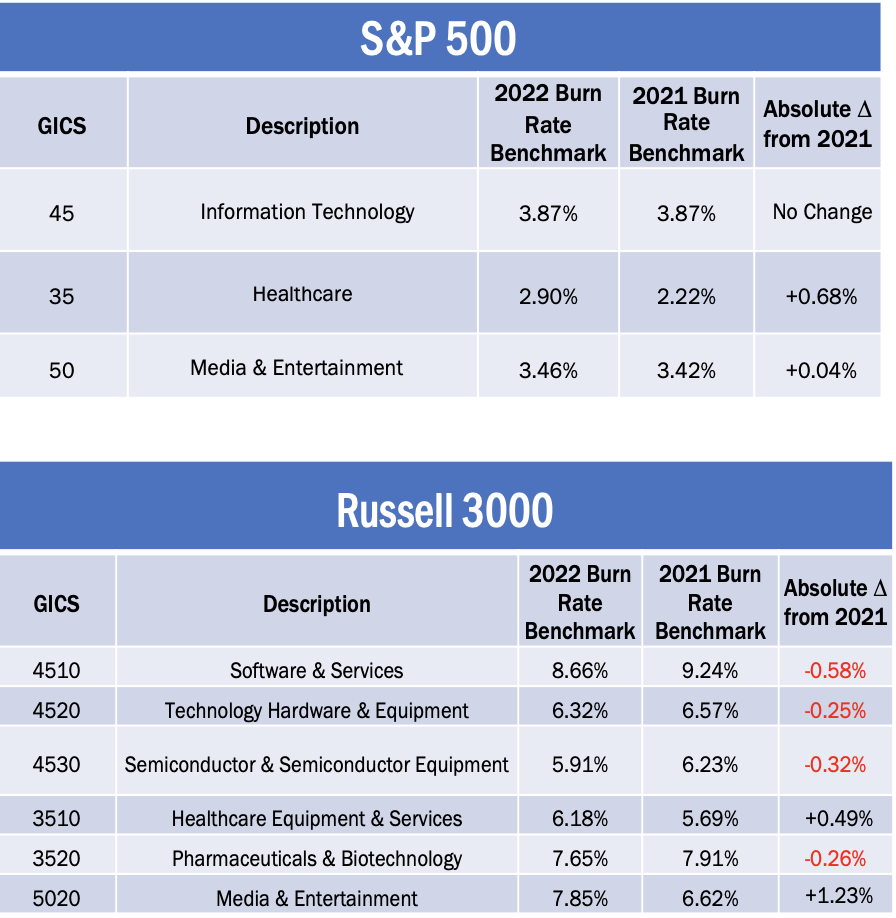 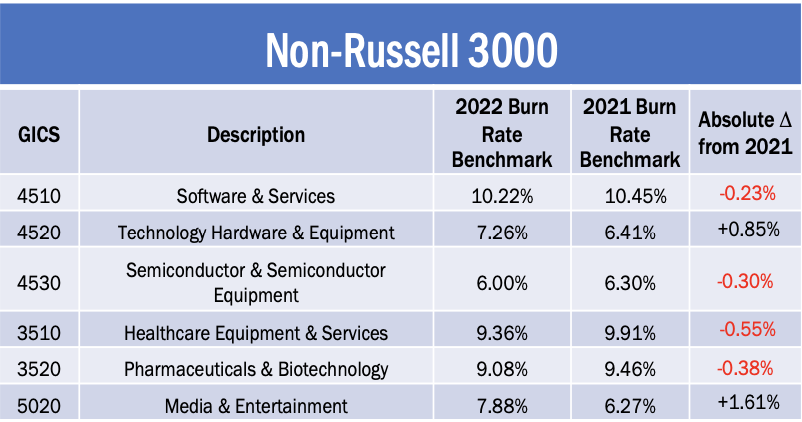 Companies should consider these updated benchmarks as one factor in their annual equity strategy review. Due to the lower benchmarks above in many groupings, companies that developed equity budgets for 2022 with consideration of the then-current 2021 limits may have less flexibility with their equity compensation plans than originally anticipated (depending on program goals, equity plan funding, competitive needs, etc.).

Compensia has significant experience in helping companies understand and address ISS’ corporate governance and executive compensation policies. If you have any questions on the topics covered in this Thoughtful Pay Alert or would like assistance in assessing how the policies are likely to affect your executive compensation program, please feel free to contact Jason Borrevik at 408.876.4035 or jborrevik@compensia.com, Mark A. Borges at 415.462.2995 or mborges@compensia.com, or Peter Kimball at 202.321.1234 or pkimball@compensia.com. 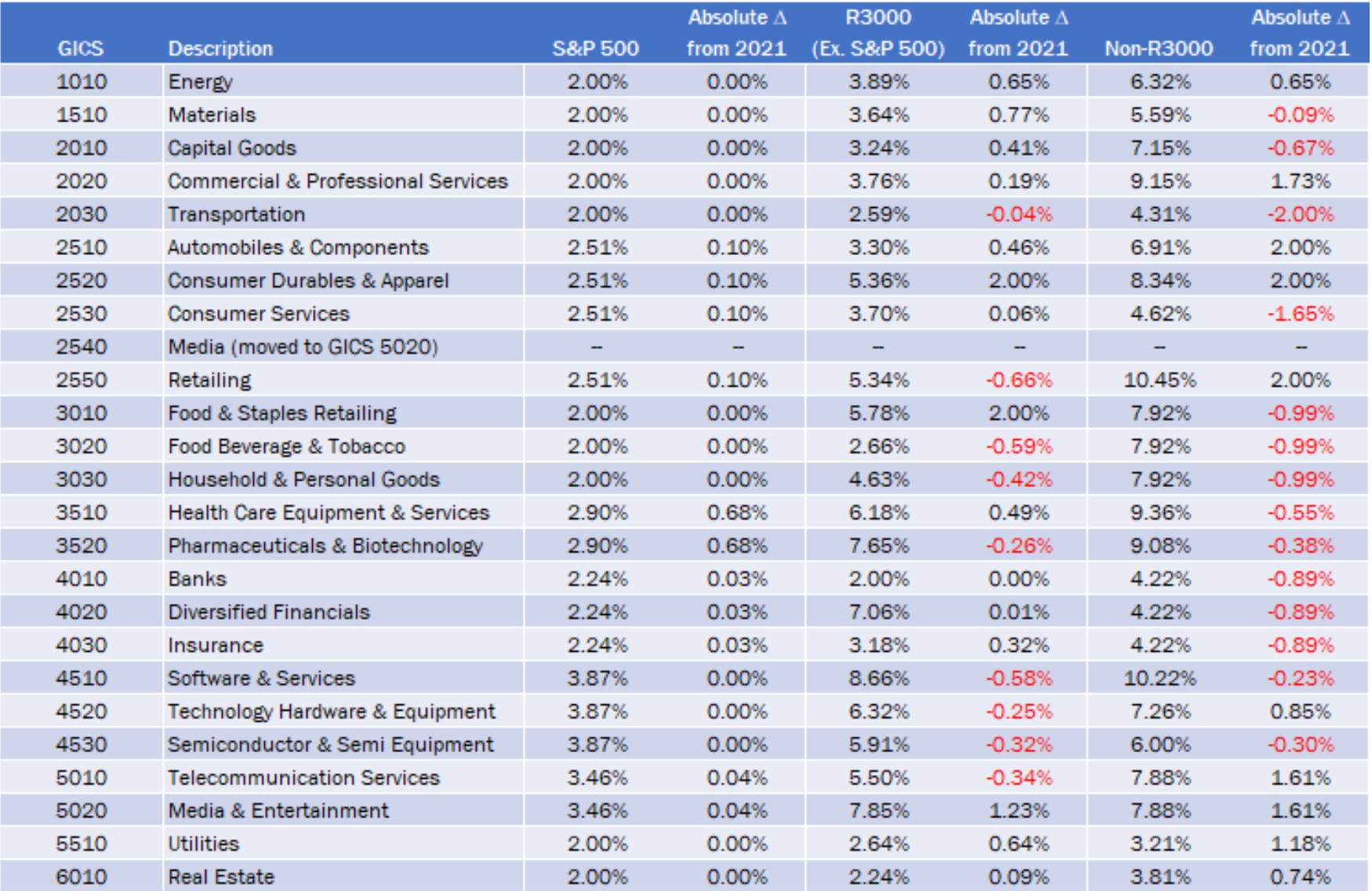