As in each of the last six years, employee stock plan proposals were plentiful in the technology sector in 2017. This Thoughtful Pay Alert summarizes the results of our review of the definitive proxy materials filed with the Securities and Exchange Commission among 150 representative publicly-traded technology companies primarily headquartered in the San Francisco Bay Area (the “Tech 150”).

Nearly one-third (47 of 150, or 31%) of the companies in the Tech 150 submitted employee stock plan proposals to their shareholders in the past 12 months (based on a review of definitive proxy statements filed for companies with fiscal years ending during the period from June 1, 2016 through May 31, 2017). This number is higher (on a percentage basis) than the practices of the 120 representative publicly-traded technology companies that we reviewed in both 2016 and 2015 (26% in each year).

This pattern reflects the typical life cycle for many employee stock plans where mature public companies generally seek to replenish their plan share reserve, or adopt a new plan, every one to three years. This pattern also reflects, in part, the growing impact of the dilution policies of the major proxy advisory firms, particularly Institutional Shareholder Services (“ISS”), and certain influential institutional shareholders, which typically strictly limit the number of shares that they will approve for issuance at any given time for purposes of making equity awards.
Further, as part of its annual update to its employee stock plan voting guidelines, in 2017 ISS continued to refine its policies for issuing a favorable plan approval recommendation, thereby compelling companies to consider making changes to their plan provisions and/or equity award grant practices to obtain ISS support. For example, many Tech 150 companies continue to add one-year minimum vesting provisions for awards to their plan to conform to ISS’ guidelines. Starting in 2017, we also began to see companies add restrictions on paying dividends (if applicable) on unvested/unearned plan awards to garner ISS support.

We also note that 18 companies in the Tech 150 (12%) submitted ESPP proposals to their shareholders for approval during the past 12 months (consistent with prior years). Investor guidelines relating to ESPPs are more lenient than those for omnibus equity plans and, typically, companies reserve a share pool that can last four or more years when seeking shareholder approval. As a result, we tend to see a lower relative frequency for ESPP proposals.

Almost two-thirds (32 of 47, or 68%) of the Tech 150 companies with employee stock plan proposals during the past 12 months include explicit limits on the annual compensation of their non-employee directors in their plans. These limits break down as follows:

While most of the time the addition of a director pay limit is included with other proposed amendments to a plan, one company, Maxim Integrated, submitted a proposal to shareholders solely to gain approval of an annual pay limit (for both cash and equity) for its non-employee directors.

Just over half (24 of 47, or 51%) of the Tech 150 companies with employee stock plan proposals during the past 12 months included a “fungible share” provision in the plan. This provision limits the amount of full-value equity awards (such as restricted stock unit and performance share awards) that may be granted from the share pool. The prevalence of fungible share provisions remained relatively consistent with 2016 (45%) and down significantly from 2015 (65%) and 2014 (83%), due to a continued shift from the use of stock options to full-value equity awards at Tech 150/120 companies. For these companies, the fungible share ratios ranged between 1.31:1 to 2.75:1 (with a median of 1.72:1) and, in most cases, were specifically derived for each company from the relative fair value of a full-value equity award compared to the fair value of an appreciation-based award (based, in many cases, on ISS’ notion of “fair value”). 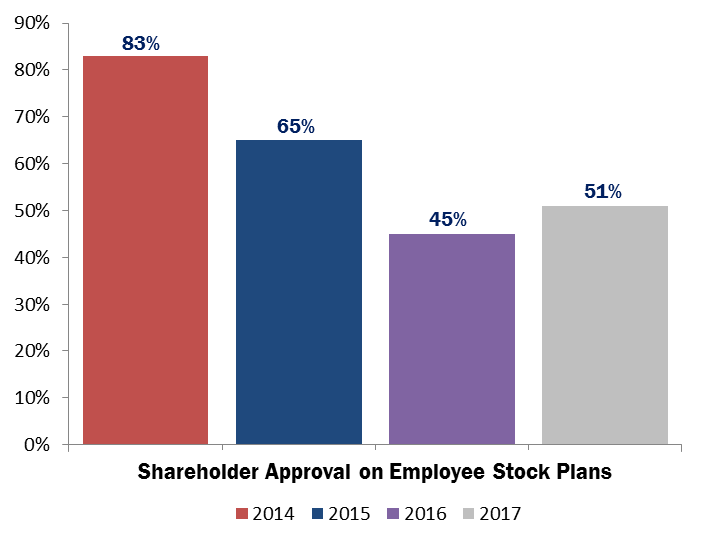 Among the 47 Tech 150 companies that sought shareholder approval of a new or amended employee stock plan in 2017, the size of the share requests (as a percentage of the company’s outstanding shares) ranged as follows:

As was the case in each year from 2012 through 2016, each of the Tech 150 companies with an employee stock plan proposal during the past 12 months saw its proposal approved by its shareholders. The average level of support was 86% of the votes cast, and 69% of the shares outstanding (versus 86% and 71%, respectively, in 2016).

Compensia has extensive experience in assisting companies in formulating employee stock plan proposals and developing effective strategies for obtaining shareholder approval of such proposals. If you would like assistance in analyzing your equity compensation strategy or negotiating the various pressure points in implementing an employee stock plan or a share reserve increase, or if you have any questions on the subjects addressed in this Thoughtful Pay Alert, please feel free to contact Jason Borrevik at 408.876.4035 or Mark A. Borges at 415.462.2995.