Even with the spotlight clearly focused on the new shareholder advisory votes on executive compensation (“Say-on-Pay”) during the 2011 proxy season, it was another bountiful year for employee stock plan proposals (that is, proposals to either adopt a new employee stock plan or increase the share reserve for an existing plan) within the public technology company community.

As in prior years, Compensia has monitored the employee stock plan proposals – and related voting results – for the 150 largest high-technology and life sciences companies headquartered in the San Francisco Bay Area (primarily in Silicon Valley), which we call the Bay Area 150.

This Thoughtful Pay Alert summarizes our findings from these results for the past 12 months, based on the Exchange Act reports of these companies as filed with the Securities and Exchange Commission. 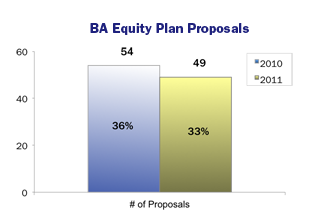 Nearly one-third of the companies in the Bay Area 150 submitted proposals to either adopt a new employee stock plan or increase the share reserve for an existing plan for shareholder action during the past 12 months (the period from June 1, 2010 through May 31, 2011); a number that was in line with the number of proposals submitted to shareholders for the prior 12-month period (June 1, 2009 through May 31, 2010).

The consistency in the number of proposals among the Bay Area 150 companies from 2010 to 2011 is likely the result of the typical life cycle for an employee stock plan. Based on the general “rule of thumb” that mature public companies seek to replenish their employee stock plan share reserves, or adopt a new plan with a new reserve, approximately every two to three years, these results suggest that, in an any given year, about one-third of the Bay Area 150 is going through the process – and attendant scrutiny – of seeking shareholder approval for an employee stock plan. This pattern is also a consequence of the dilution policies of the major proxy advisory firms, such as Institutional Shareholder Services (“ISS”), and some institutional investors, which typically limit the number of shares that they will authorize for equity compensation purposes at any given time.

Only one of the 47 companies that have reported the results from their annual meeting of shareholders in the past 12 months has disclosed that its shareholders rejected its employee stock plan proposal. All the other proposals were approved, with an average favorable vote of 75.2% of the votes cast (which was largely consistent with the average level of support in 2010 – 74.5%). Initially, Integrated Silicon Solution, Inc. reported that its shareholders had failed to approve its employee stock plan proposal. Subsequently, however, the company adjusted its share request and the proposal was overwhelmingly approved before the end of the year.

While some exceptions were evident, generally speaking proposals involving share amounts ranging between 2.5% – 4% of a company’s outstanding shares tended to generate between 75% to 85% support from shareholders. Once outside this range, however, the vote outcome could be more problematic.

Compensia has extensive experience in assisting companies in formulating employee stock plan proposals and developing effective strategies for obtaining shareholder approval of such proposals. If you would like assistance in analyzing your equity compensation strategy or negotiating the various pressure points in implementing an employee stock plan or a share reserve increase, or if you have any questions on the subjects addressed in this Thoughtful Pay Alert, please feel free to contact Jason Borrevik, Mark A. Borges, or any of our other consultants.

The JOBS Act and Executive Compensation