Director Compensation Trends in the Technology Sector Over the Past Decade

Director Compensation Trends in the Technology Sector Over the Past Decade

It is a common impression that director compensation programs of publicly-traded technology companies are largely homogeneous – a cash retainer for general board service, additional cash retainers for board committee service, and an annual equity award. This structure is reflective of the purpose of these programs, which is to compensate directors with cash and equity (typically in the form of restricted stock unit (“RSU”) awards) for their time as a steward of the company, the experience, expertise, and leadership that they bring to the Board, and to align their interests with shareholders in the long-term fortunes of the business. These programs are much less leveraged than executive compensation arrangements and are rarely, if ever, performance driven.

Yet, when you look a little deeper, it’s evident that these programs are not – and have not always been – static. While the basic pay elements have remained the same, over the past decade, we have tracked several notable changes in how the compensation of technology company directors is structured and delivered. Recently, we reached into our archives to re-examine the key features of the director compensation programs of 150 representative publicly-traded technology companies headquartered in the San Francisco Bay Area in 2010. We then compared these findings against the data that we have pulled through April of this year from 200 representative publicly-traded technology companies throughout the United States.1At a high level, the comparison illustrates how the design and structure of director compensation programs has evolved over the past 10 years.

This Thoughtful Pay Alert summarizes our recent findings from comparing the design of the director compensation programs represented in company data sets from 2010 and 2020.

In 2010, directors were often paid cash compensation in the form of retainers for general Board or Board committee chair or member service and meeting attendance fees. Over the past 10 years, companies began eliminating additional fees for attendance at board and committee meetings, often as a matter of administrative convenience, and increased fixed cash retainers. Today, the payment of meeting fees is rare. 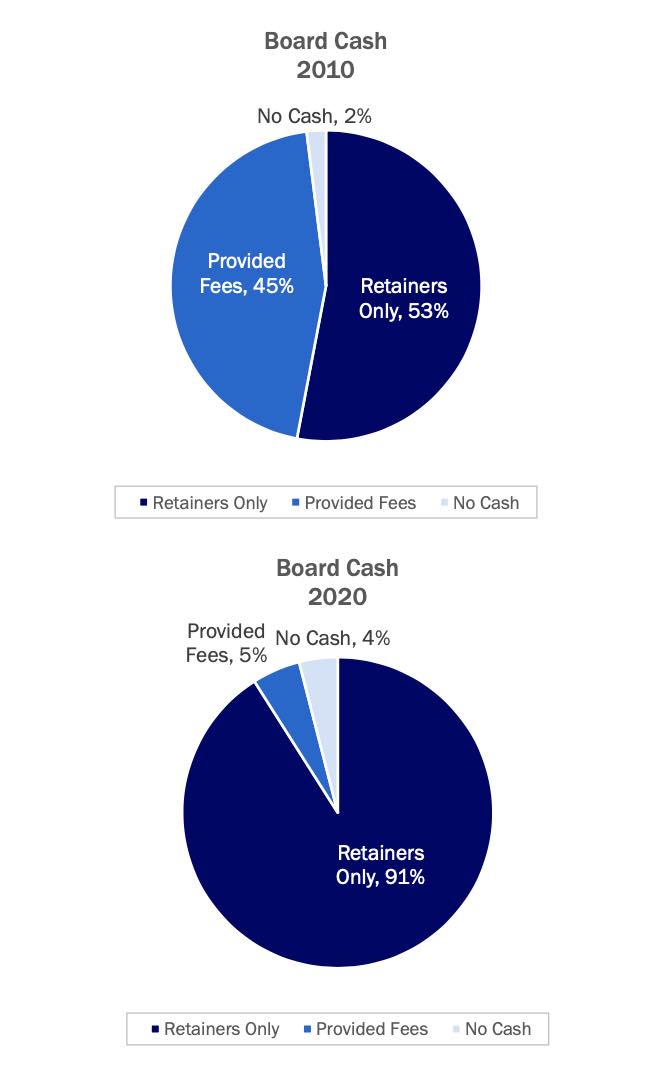 Over the past decade, companies have moved from using solely stock options or a combination of stock options and RSUs when granting equity awards to their directors to almost exclusively using RSU awards. This has largely been the result of the broad acceptance of RSU awards in the marketplace as a simple equity vehicle that retains value in virtually all market conditions, as well as eliminating the perception that, by receiving stock options, directors could be influenced to take excessive risks to drive up the stock price in the short-term. 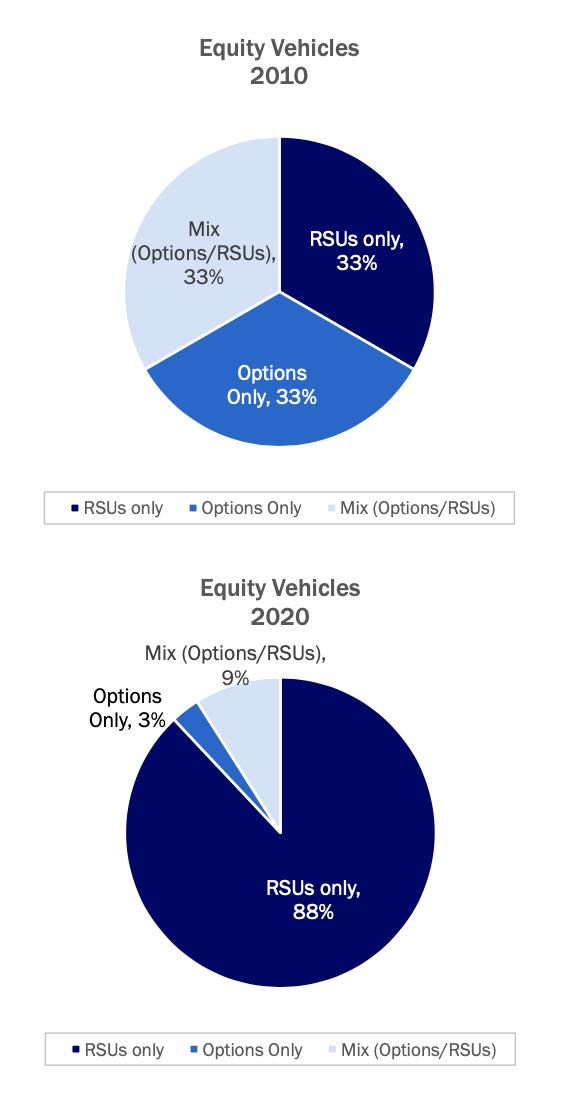 Previously, it was not uncommon to grant a new director joining the Board a “premium” equity award, often with a value approximately 1.5x to 2.5x the size of the annual equity award, subject to a multi-year vesting schedule. That practice has continued to decline in recent years as the size of annual equity grants has slowly increased, such that the grant of an initial “premium” equity award has become much less common in the 2020 data set. It will be interesting to see if this practice re-emerges, particularly in newly-public companies trying to fill their independent Board seats and stand out relative to other more established companies. 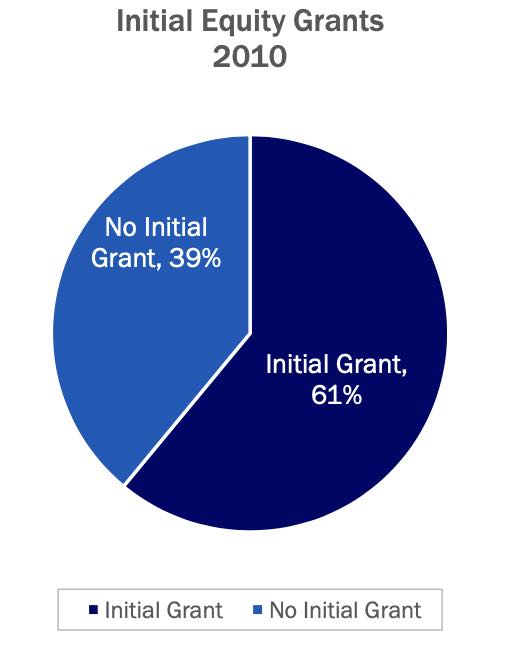 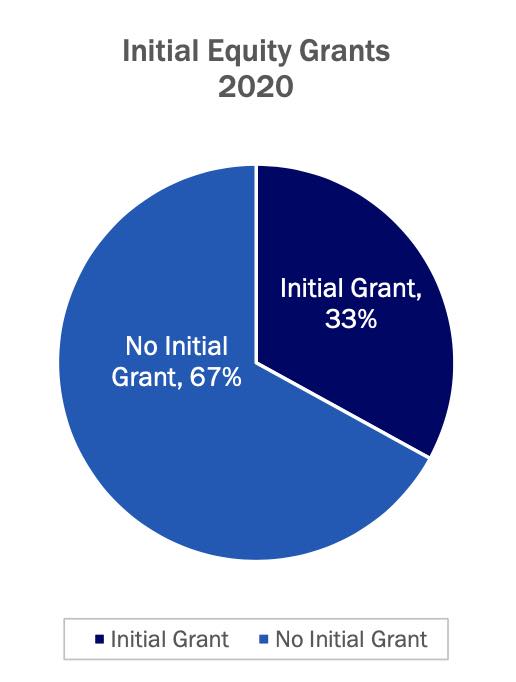 The equity awards granted to directors are either denominated in a specific number of shares or a fixed dollar value. In 2010, only 30% of the companies in the data set used a fixed value approach, with the rest specifying a fixed number of shares to be granted to directors on an annual basis. Given the frequent volatility in technology company shares, this practice led to some extremely large (and, occasionally, small) award values which can lead to misalignment with intended market pay positioning and potentially heightened litigation risk over perceived “excessive” director compensation. Consequently, that trend had changed dramatically over the past decade. Today, 95% of the companies in the 2020 data set have established policies of making fixed value-based grants of annual equity awards. 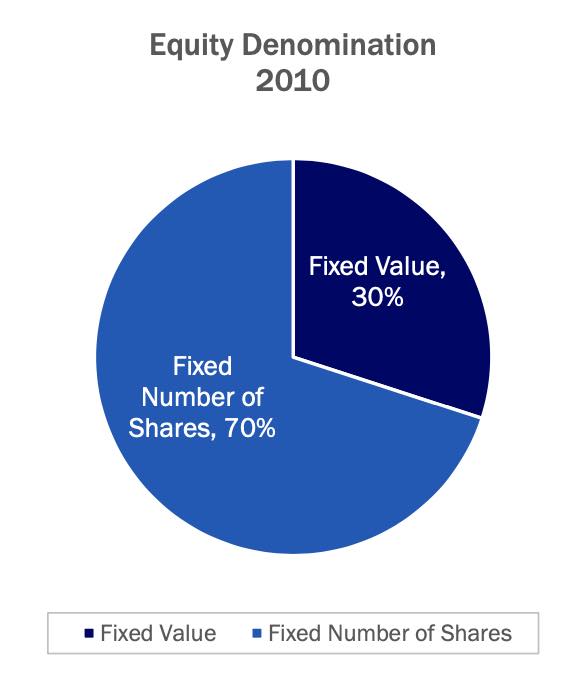 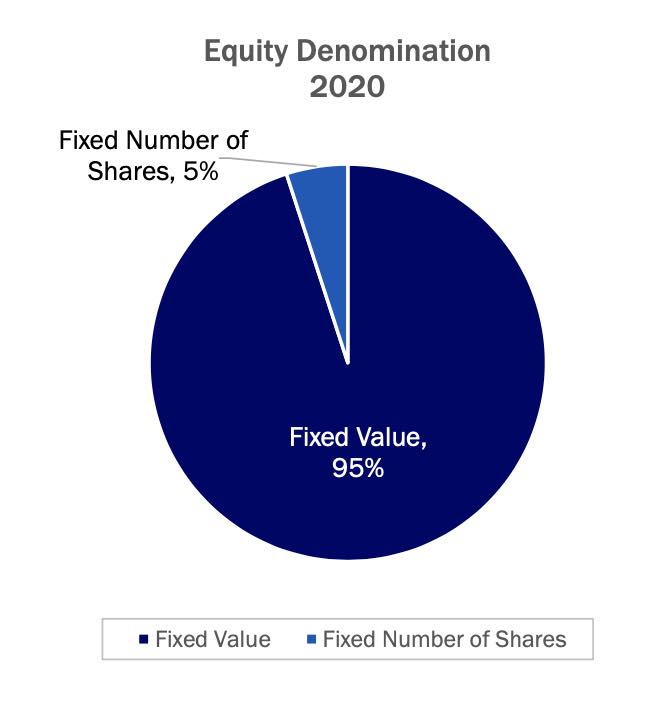 In 2010, the mix between cash and equity compensation was generally even, with half of the directors’ compensation being paid in cash and the other half being paid in equity. Over the past decade this balance has changed, with nearly 75% of the overall award value of the 2020 data set being delivered in the form of equity and only approximately 25% being paid in cash. Recently, we’ve noted a growing trend for companies that have just completed their initial public offering to pay their directors entirely in equity compensation. In 2010, only four companies (3%) provided compensation solely in the form of equity.

In recent years, director compensation has come under scrutiny from the plaintiffs’ bar for claims of “excessive” compensation. Where directors have an interest in the transaction in question, such as when setting their own compensation, under recent Delaware case law they carry the burden of proof to prove that the pay decisions, including the process used and the amount involved, are objectively fair to the company and its stockholders. To ward off such claims, many of the technology companies in the 2020 data set (68%) include a limit (median value $750,000) in their employee stock plan which caps the amount of equity (and often, cash) compensation that can be paid to directors in a single year. Such limits were virtually non-existent in 2010.

As evidenced by our findings, the director compensation programs of publicly-traded technology companies have gradually changed over the past decade into the homogeneous structures that we commonly see today. Given the traditional oversight role of Boards of Directors, combined with the ongoing scrutiny of director pay (both as a result of litigation risk and the increased attention of the major proxy advisory firms), we expect that technology companies will continue to use the “lower-leverage” program frameworks that are prevalent in today’s marketplace. Further, the average compensation payable per director, as well as a company’s overall “cost of governance” (that is, the value of the compensation delivered multiplied by the number of non-employee directors), will continue to correlate to company (and, thus, Board) size based on the prominence and complexity of the company. Even so, we would not be surprised to see an increase in the popularity of “all equity” programs as directors agree to forgo cash retainers in exchange for the opportunity to share in the future growth of the company, thereby strengthening their alignment with shareholders.

One emerging trend that could affect board structures and, correspondingly, director compensation that bears watching involves the growing shareholder focus on environmental, social, and governance (“ESG”) issues. As the available body of research increasingly shows the connection between responsible ESG policies and positive company performance, investors are demanding greater board understanding and leadership of these initiatives. This is likely to manifest itself in both Board size and composition. We note that, at the median, Board size has increased from six to seven members over the past decade, a trend that may, in part, be a response to the call for greater diversity. Boards are also giving more attention to director candidates with specific skill sets, including in such key ESG areas as human capital management. We believe that these initiatives will lead to greater competition for directors with the backgrounds and expertise in the areas most needed by the company (perhaps providing further motivation for the return of “premium” valued initial equity awards).