A fundamental element of corporate governance is the composition of the board of directors. And while SEC rules require disclosure of how the board nominating committee considers diversity in identifying director candidates, such rules do not define the term “diversity,” leaving it to each company to determine what it means in the context of their business. As a result, many companies focus on experiential, rather than socio-demographic, attributes as the key factors in assembling their board. However, in recent years, key stakeholders, including institutional shareholders and their advisors and in some instances, state legislatures, have begun to make significant strides in ensuring that factors such as gender, race, and national origin play a more significant role in the selection process.

In 2018, California was the first state to enact a law mandating increased gender diversity on boards of directors, requiring public companies headquartered in the state to have at least one female director by the end of 2019 and, depending on the size of the board, multiple female directors in subsequent years. More recently, Washington state approved legislation requiring certain public companies to either have a “gender-diverse board” by January 1, 2022 or comply with new board diversity disclosure requirements. Other states continue to study the issue or require enhanced disclosure, including Illinois, Maryland, and New York.

These legislative initiatives have been supplemented by the policies of the major proxy advisory firms. ISS recommends voting against the reelection of the chair of the nominating committee (or other directors on a case-by-case basis) where there are no females on the board of directors. Glass Lewis has a similar policy and beginning with annual meetings of shareholders held after January 1, 2022 will generally recommend voting against the chair of the nominating committee with less than two female directors on boards with at least seven members.

Further, in December 2020 the NASDAQ filed a rule proposal with the SEC for a new listing requirement that would require (i) all listed companies to disclose board diversity statistics (including gender, race or ethnicity, and sexual orientation), (ii) listed companies with five or fewer directors to have at least one diverse director, and (iii) companies with six or more directors to have two such directors, one who self-identifies as female and one as an underrepresented minority or LGBTQ+, or explain why the board does not include such individuals. In March, the SEC issued an order instituting proceedings to determine whether to approve the proposed rule change, essentially inviting additional comment from the public and effectively postponing a decision on the proposal.

In response to these developments and to determine how the technology industry is responding to these new laws and policies, we recently conducted a study of the composition of the board of directors of 200 representative publicly-traded technology companies throughout the United States (the “Tech 200”). These companies span the software (103 companies), technology hardware and equipment (47 companies), and semiconductor (50 companies) industry sectors. Just over half (54%) of the companies in the Tech 200 are headquartered in California. Data was gathered from the most recent definitive proxy statement available for the company, as well as from its corporate website, as of September 4, 2020.

California now requires public companies with their principal executive offices located in the state (whether or not they are incorporated in California) to have at least one female member on their board of directors and, where the company has five or more directors, multiple female directors on the board no later than December 31, 2021, as follows: 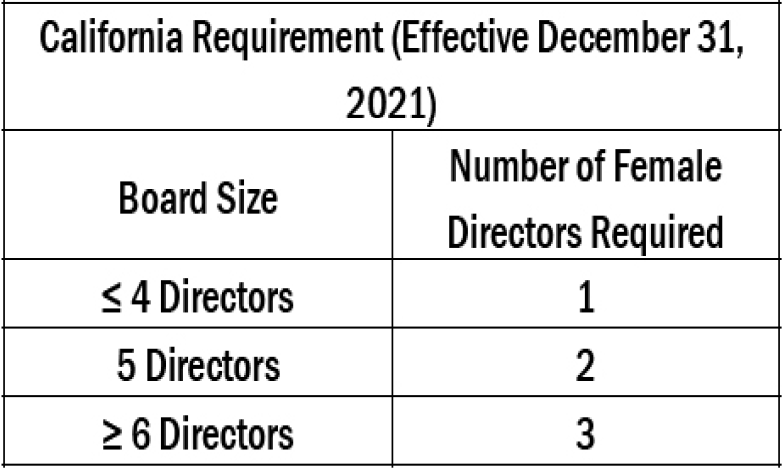 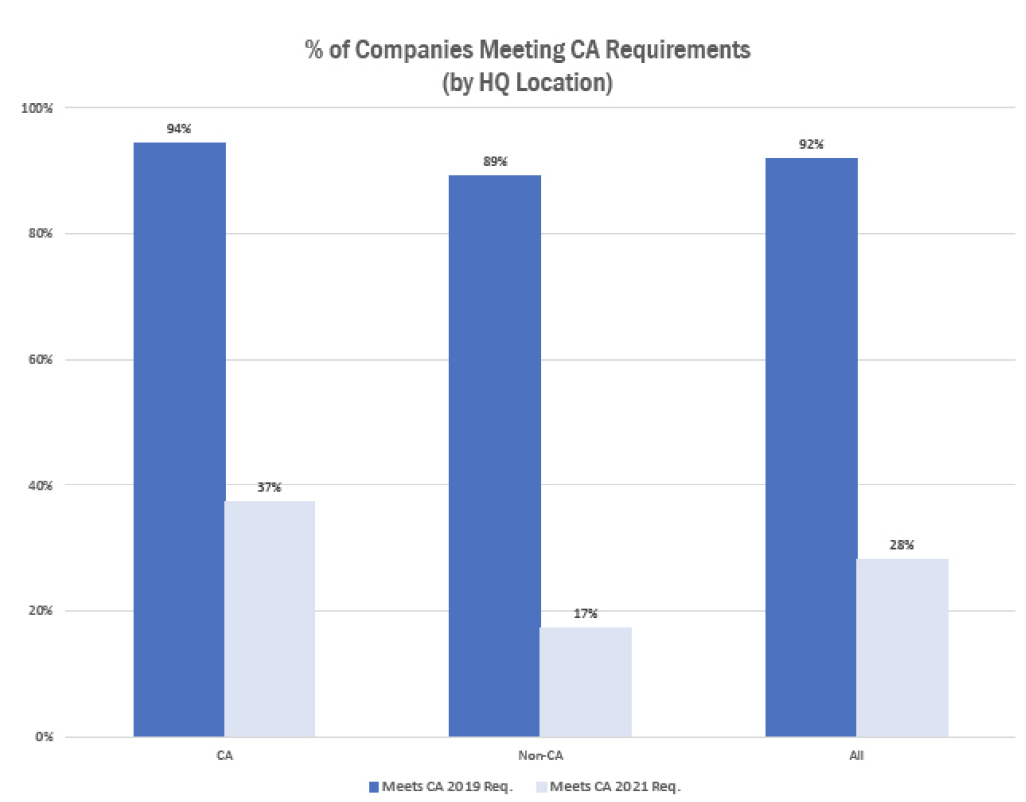 Demographics of Board Composition

In the course of our research, we also identified the following characteristics at both the company level (headquarters location and industry sector) and the individual director level (tenure).

As would be expected where there is an existing legal requirement, companies with their headquarters in California tend to have a higher percentage of female directors on their boards of directors than companies that are headquartered outside California: 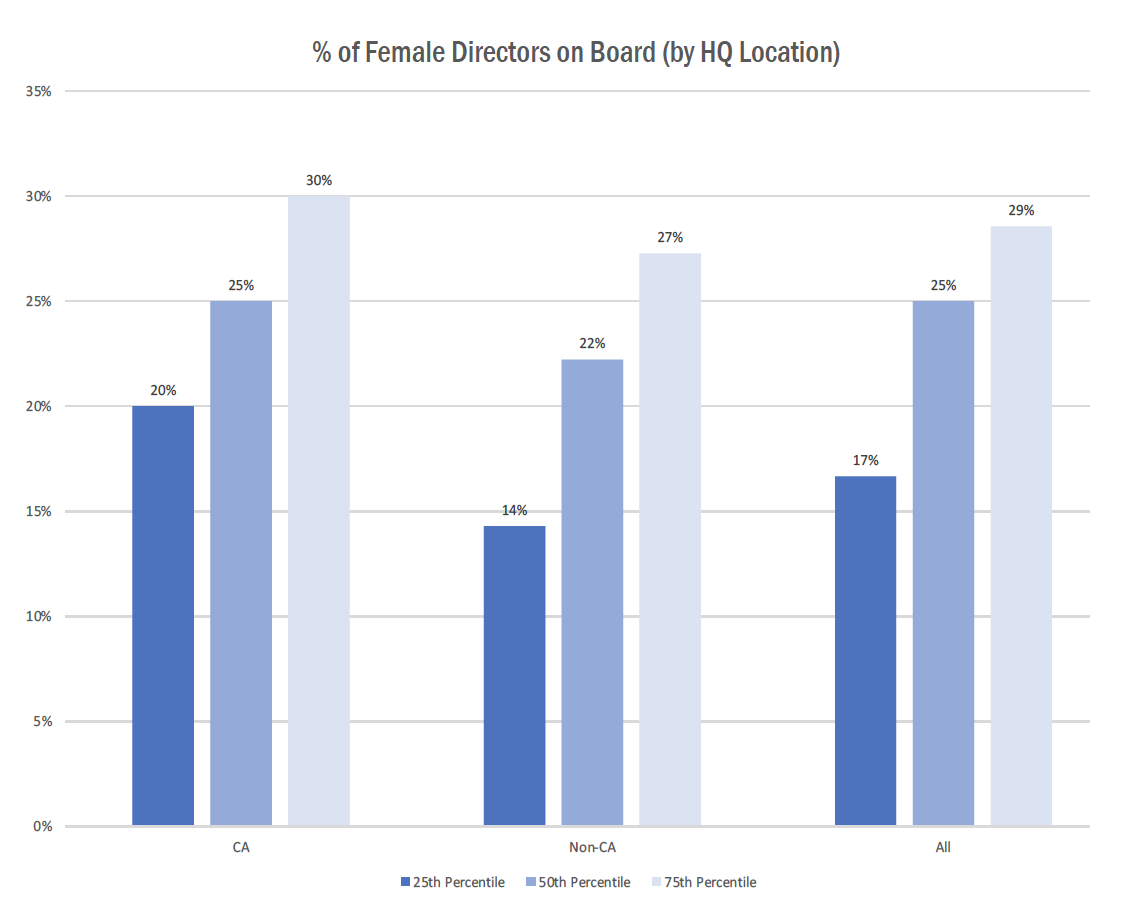 We also found that in the technology industry software companies tend to have the highest percentage of female directors on their board of directors: 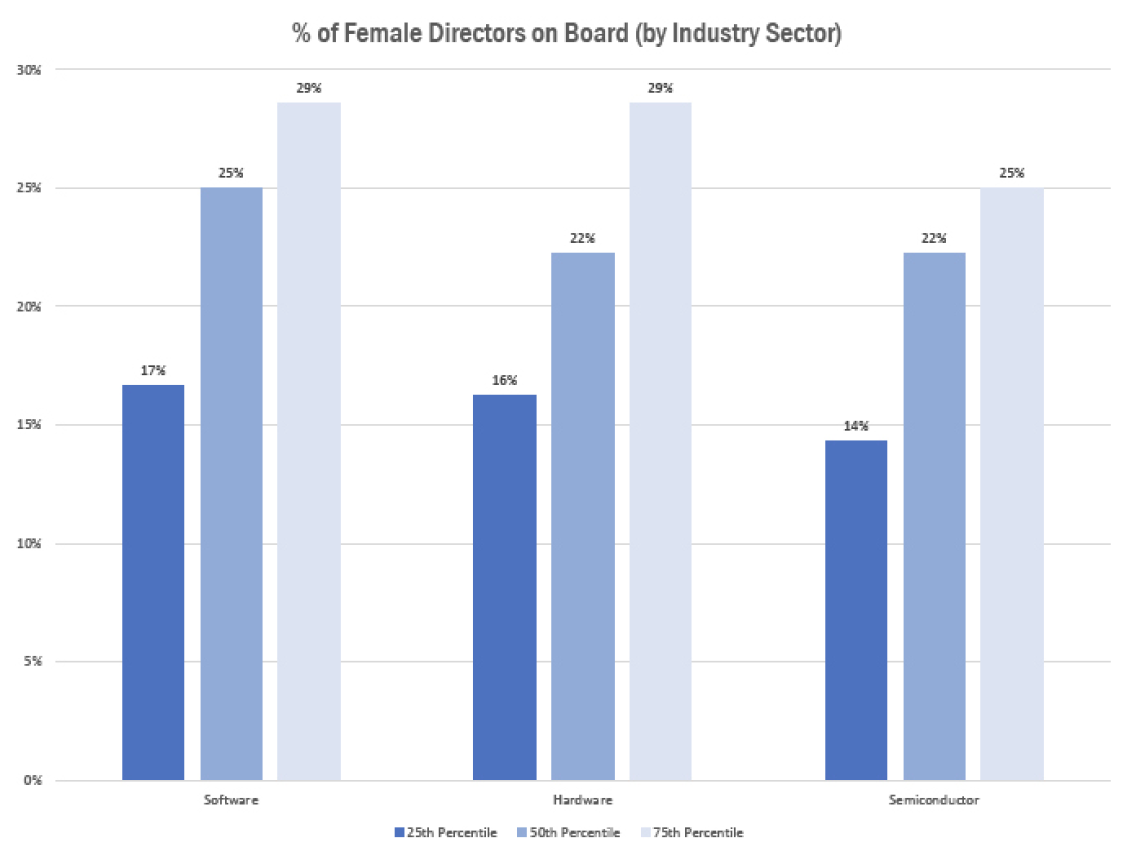 Median Tenure of Female vs. Male Directors by Headquarters Location

At the median, male director tenure tends to be approximately five years longer than female tenure. However, female directors have a slightly longer tenure among companies headquartered outside California. 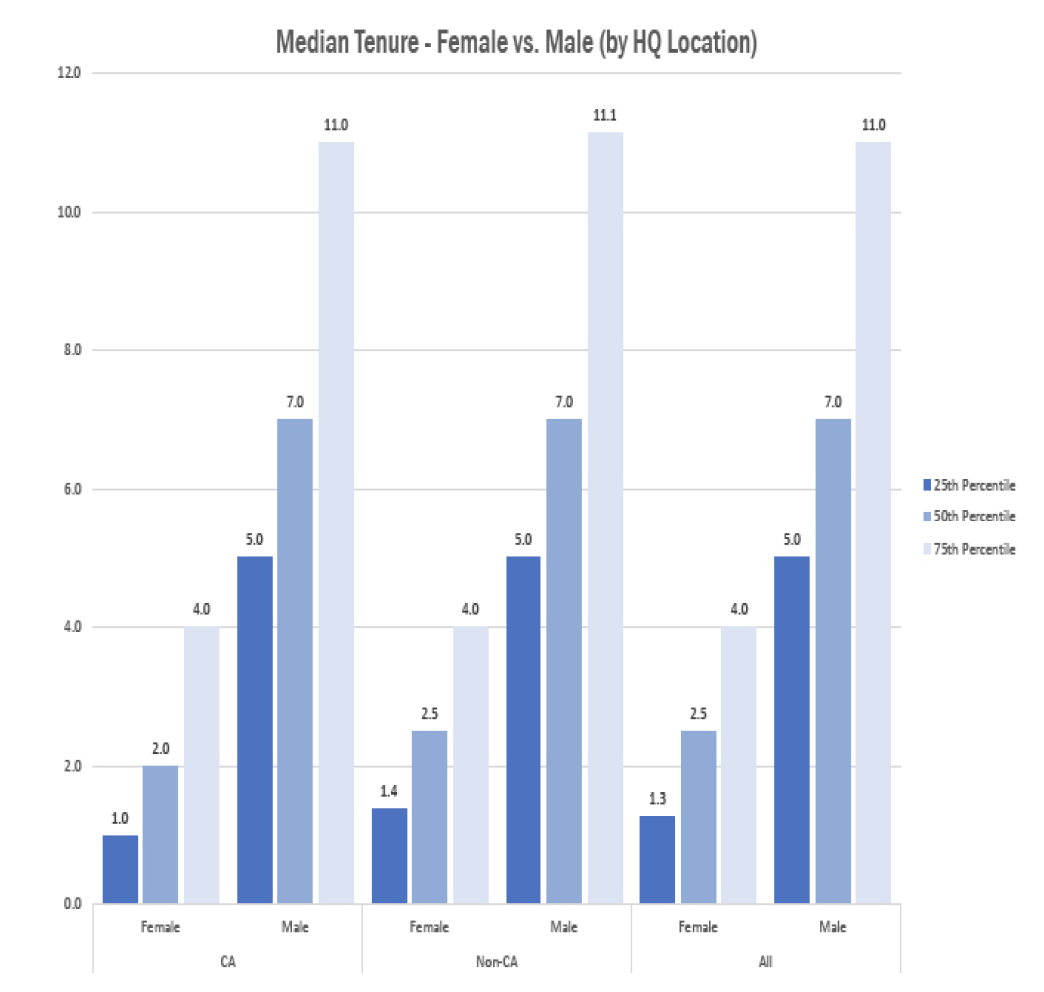 Median Tenure of Female vs. Male Directors by Industry Sector 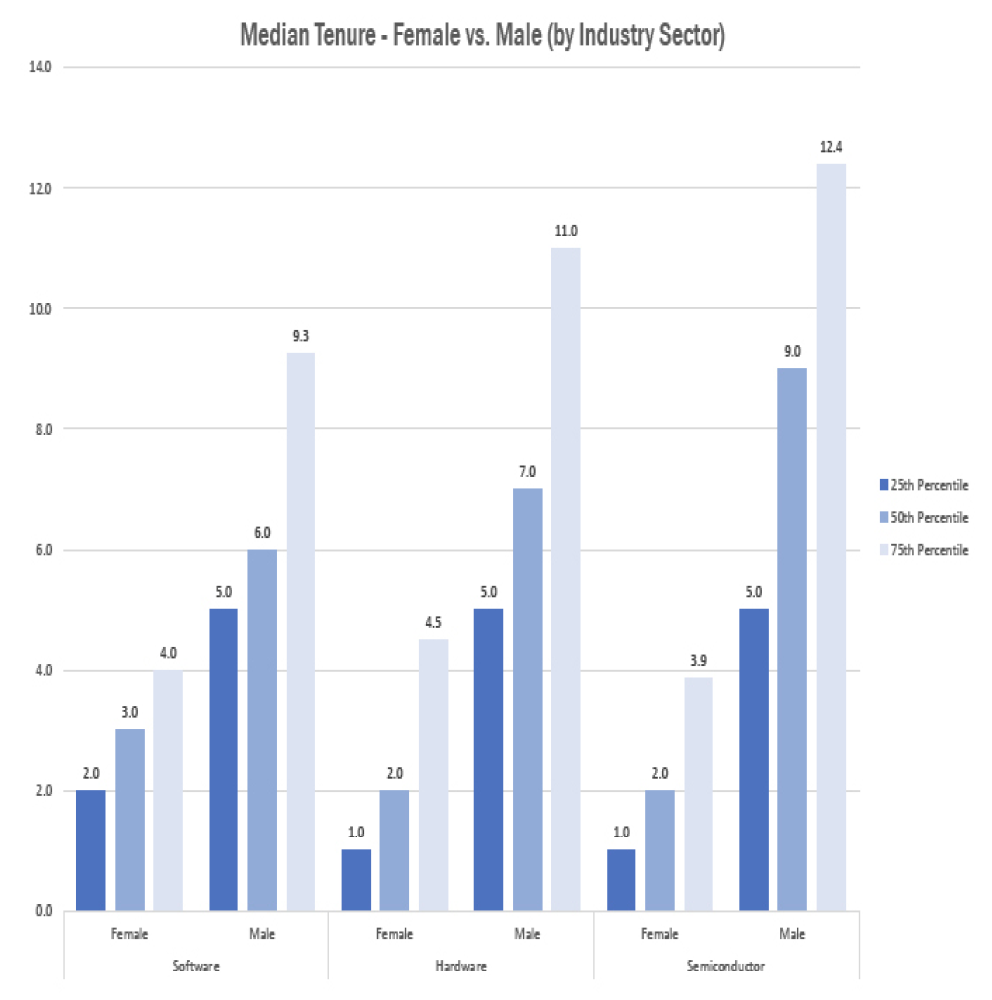 In examining the shift in board composition over the past two years, we observed both structural and compensation-related changes between 2019 and 2020 that may have been influenced, in part, by diversity-related recruiting efforts as companies have responded to the call for greater board gender diversity:1

In what is clearly becoming a more competitive environment for qualified directors, we commonly see enhanced initial equity awards to new directors in post-IPO board compensation policies.

While the push towards greater board diversity started with gender, it has since expanded into the areas of race and ethnicity as well. Beginning with annual meetings held on or after February 1, 2022, ISS will recommend voting against the reelection of the chair of the nominating committee (or other directors on a case-by-case basis), where a company’s board has no apparent racial or ethnic diversity. For annual meetings beginning January 1, 2022, Glass Lewis will tailor its voting recommendation for the chair of the nominating committee in accordance with board composition requirements reflected in applicable state laws when and as they come into effect.

These policies enhancements come on the heels of California’s enactment in 2020 of Senate Bill 979, which requires publicly-traded companies headquartered in the state to have at least one director from an “underrepresented community” on its board of directors by the end of 2021 and multiple such directors (depending on the size of the board) by the end of 2022.

Momentum for greater board diversity is building at the federal level as well. In April 2021, the House Financial Services Committee approved the “Corporate Governance Through Diversity Act of 2021” (H.R. 1277), a bill aimed at increasing the number of underrepresented minorities on boards of directors through annual proxy statement disclosure of self-identified veteran status and racial, ethnic, and gender composition of boards, director nominees and executive officers. A similar bill (S. 374) is currently pending before the Senate Committee on Banking, Housing, and Urban Affairs. Both bills enjoy broad support, including from the U.S. Chamber of Commerce and several financial trade groups.

At all levels, the composition of corporate boards of directors is going through a significant transition, with a sharp increase in board membership as well as the disclosure of statistical information about the participation of previously underrepresented groups likely to be the norm in the next couple of years.

Perquisite and Executive Benefit Practices in the Technology Sector